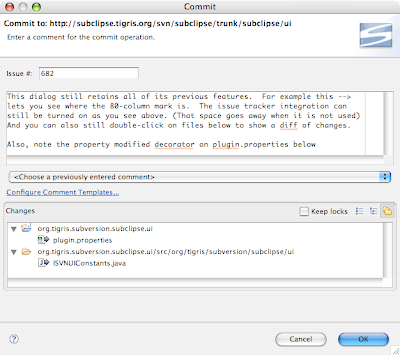 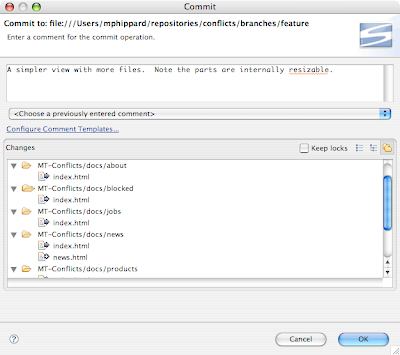 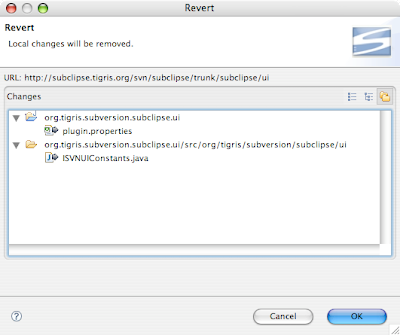 Other dialogs like Switch and Create Branch/Tag also received the new wizard look. Please give these builds a try and let me know what you think. The best places to reply would be the Subclipse users@ mailing list or in the issue tracker for this issue 682.
Posted by Mark Phippard at 11:03 AM

the subversive versus subclipse is killing me. Stop making me switch between the two ;p

proposols for the new "right-click and remove":
1. add a column with a small button in each line to remove this item, so one left click is enough.
2. Is there a undo feature? Is there a revert all?

It's not available as subclipse release, right?

This is available in a release of the 1.3.x development stream leading to the 1.4 release. This will happen around end of year when SVN 1.5 is GA.

Mark, one feature that I was missing ... if you select a previous comment, TortoiseSVN also pre-fills the issue number. That's very comfortable. Can the renovated dialog also fill in the issue key?

We have a similar feature except ours would show the issue # as we inserted it into the comment. Possibly only if you had done a commit with the message though (Cancel also remembers comments).

TortoiseSVN must do some kind of parsing of the comment to extract the issue from the message. Either that or they store their comments differently. If it is a feature you want, I'd say file an issue.

Can you at least select multiple files before right-click and removing them from the list? I often find myself committing one or two out of hundreds of changed files. It would be great if I could select all, then control-click to deselect the files I want to commit, then remove everything that's still selected.

I have a problem with subclipse related to JavaHL. After I installed it, it had problems with SVN settings. I added /usr/local/lib to java.library.path as suggested, it helped but only partially. New error came out:

I'm using RHEL 4. May be you have any idea what is it?

Your problem is clearly this:

That is saying the SVN library was expecting to find that symbol in one of its dependency libs and did not find it.

Thanks. I an e-mail there. I'm note sure which library is supposed to contain gss_delete_sec_context.

Ia mh avinga WEIRd troublew iths ubclipse... i have the Europa distribution Version: 3.3.2
Build id: M20080221-1800 and maven plugin. Nothing more than that. When sublipse is installed my project (that is ina svn repo)j ustm ake eclipse crashed. Ih avea si milarc onfiguration in another machine with not rouble. Ist herea ny known issue related with any Windows XP update or any HP computer related software? Thanks in advance

As far as I can tell this change forces users to use their mouse. I recommend you at least allow users to use the delete button to remove a file from the commit. On windows you may be able to use the context menu/right click menu button to show that dang popup but that adds even more keystrokes for arrows/enter key. Before I could just use tab+space over and over to select/deselect a list of files. To summarize: add a delete shortcut or people will despise it.

I really don't like the force right click instead of the check boxes for removing files. Any chance you could take a poll and see what people prefer?

I really like to pick and choose files that I commit, and change that list easily. Checkboxes are ideal for the type of commits that I (and the members of my team) perform regularly. With this new functionality, if I want to go back and add a file that I had removed from the list it creates a lot more steps to get back to the select list again.

Really the only situation where this is optimal is when people commit all their files every time. But you can still do this with all checkboxes being selected by default. So really there is nothing gained, other than marginally simplifying the view. In other words, not worth it.

Hello, Do you know how to disable commit changesets without comments in SVN?

I appreciate your work, but this is a step backwards. A check box + flat list is a much simpler way to manage what files are checked in or not. The TortoiseSVN commit dialog is much better to use.

Subclipse 1.4.2 has made some changes to the dialogs. They now include checkboxes and some other ways to manage unversioned files en mass.

My company has a tool (built on eclipse api's) which currently uses Subversion 1.4 and Subclipse 1.2.4. We would like to migrate to Subversion 1.5 and subclupse 1.4.x

Could you please direct me to a site or url which would help me get started on the migration.

I cannot think of anything in particular to point you to. You probably just need to adjust dependencies to account for packaging changes in 1.4.x.

I came across this blog looking for a way to restore the column that showed the file status, i.e. "missing", "deleted", "added", "unknown", "changed" etc.
Can you please re-add this very helpul column? Since no decorators are used (apart from the one indicating property changes), there's NO WAY to know exactly to what changes do I agree upon pressing the OK button.

There is no plan to change the dialog as that would require going back to table, which we do not intend to do. It is not true that there are no decorators. The same ones used in the Synchronize view are used. An outgoing arrow for modifications. The arrow has a + in it if the file is added, a minus if deleted, and there is no arrow at all if the file is currently unversioned.

We are basically emulating the UI of the CVS plugin which our users have told us for years they want us to do.

Thanks for your comments. If you want to continue the discussion please use the Subclipse users@subclipse.tigris.org mailing list.